Soccer for Peace’s 2013 Goals of Peace summer camp was held at the Nir HaEmek Youth Village in the Wadi Ara region of Israel.

For 4 days and 3 nights, 35 children ages 10-12 participated in soccer practices, soccer scrimmages, cultural field trips, and dialogue and educational programming; 21 of the campers were Arab and 14 were Jewish. The camp consisted of mixed groups, both Jews and Arabs, with each team led by Jewish and Arab counselors and a soccer coach. 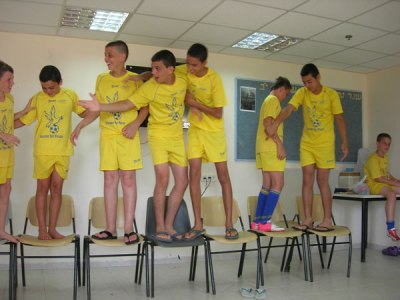 “I would not have had the opportunity to make Arab friends if it wasn’t for the program. I have made many new friends, visited their homes and they have visited mine,” shares Ido, one of this year’s counselors. Haitam, another counselor, shares, “I participated as a kid here and it is great to be able to give back to the program, as I have made so many new friends here. It is amazing to see the process that all of the participants undergo; they mature a lot in those few days.”

A group of the Jewish children that attended camp are players from the league that play regularly and are affiliated with the Barkai Center at Kibbutz Barkai; the Arab campers came to camp through the Welfare Ministry’s informal education department. All of the Arab campers were from low socio-economic backgrounds. The campers came from three villages affiliated with the Menashe Regional Council, Eleran, Meisar, and Umm at Katuf. 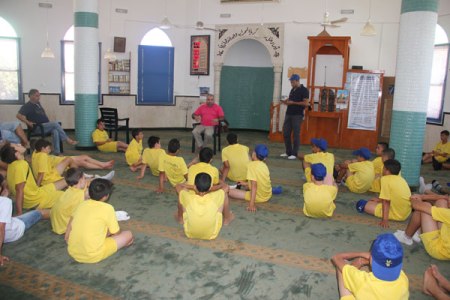 The camp’s programming included soccer practices and tournaments between all the campers. The soccer practices were accompanied by educational dialogue, problem solving and group activities covering the topics of identity and “the other”. The camp was also a great social outlet for the campers who had access to the village’s pool and cultural activities.