Soccer for Peace programs are built upon three pillars: 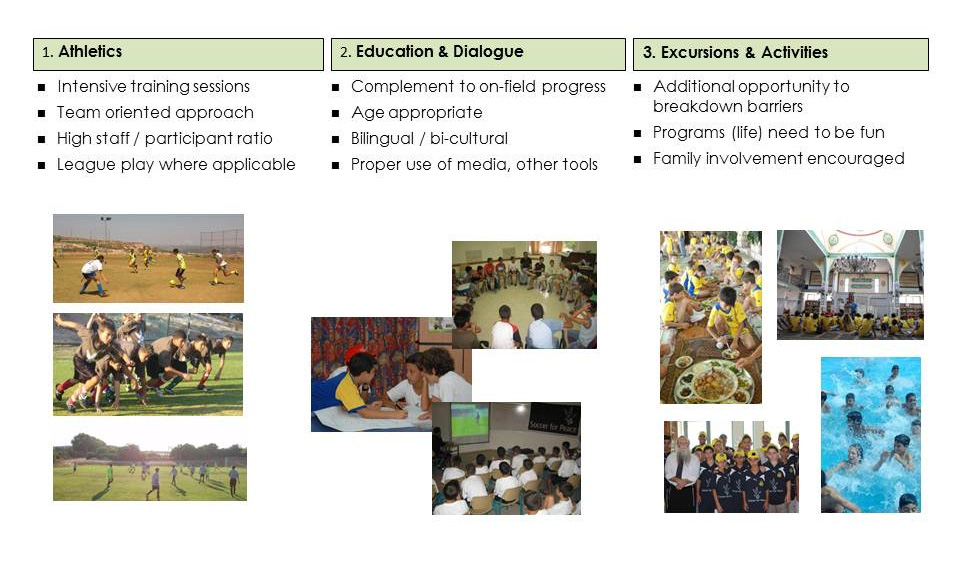 A typical day at summer camp may consist of two high impact training sessions, two hour-long dialogue sessions, and additional events  potentially including free swim, arts & crafts or theatre; an evening activity and of course meals. Special activities such as excursions to one another’s houses of worship (i.e. mosque and synagogue), visits to professional teams and a barbecue for the parents round out the program. Campers mix not only on the field and in the classroom but in the dorms as well. The camp occurs in the summer and has previously up to one week. Our hope is to extend that for up to eight weeks.

In October 2007 Soccer for Peace also launched a year-long after school program, wherein camp participants returned for a similar mix of programming. 3-4 times per week they gather on the pitch, and once a week they participate in dialogue workshops. The group, divided into several teams, also competes in a local league running the length of the school year. As per the camp, the year-long program includes social and cultural excursions. The size and frequency of the after school program varies directly with budgetary constraints.

Ideally, Soccer for Peace would add a new group of 10 year olds to camp every summer. That group would subsequently be enrolled in the year-long program, and then return to camp the following year. This cycle would continue until the age of 16, such that a given group of Jews and Arabs will have near daily contact in those formative years.