What is Soccer for Peace?

“Out beyond ideas of wrong-doing and right-doing, there is a field. I will meet you there.” 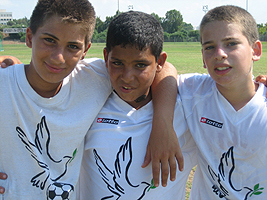 Soccer for Peace is a non-profit organization aiming to unite children of war-torn nations in their shared love of soccer. Based in New York City, the organization has no affiliation; political, religious or otherwise.

Originally conceived as a one-time event, Soccer for Peace has blossomed into an ongoing peace-building effort. In 2005 we held our first ever overnight camp, providing intensive soccer training and dialogue workshops to 25 Arab and 25 Jewish children. In 2006 we repeated the effort, albeit on a far larger scale.

We returned in 2007, this time in partnership with the Maccabim Association, the community services arm of famed soccer club Maccabi Tel Aviv. In that same year we also launched our after-school program, such that campers and new participants could continuously partake in the same mix of programs.

Though conflict exists in every corner of the world, so too does soccer; the most watched and played sport on earth. United in their love of the game, participants in our programs form organic relationships, implicit in which are the trust and respect necessary for constructive dialogue.

With this as our guiding principle, Soccer for Peace believes that sport can serve as both a metaphor and vehicle for peace in our time.