This year’s summer camp was held at the Nir HaEmek youth village in the Wadi Ara region.

For 4 days and 3 nights, 74 children ages 10-15 participated in camp activities; 39 of these children were Arab and 35 were Jewish. 32 of the Arab campers and 25 of the Jewish campers responded to the survey. The results show the strong positive impact the camp makes on all of its campers. 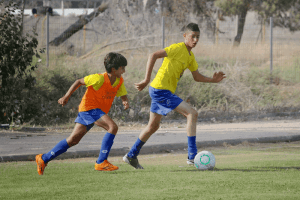 The camp consisted of mixed groups, both Jews and Arabs, with each team led by several Jewish and Arab counselors and a soccer coach. A group of the Jewish children are players from the league that play regularly and are affiliated with Barkai; the Arab children came to camp through the Welfare Ministry’s non-formal education department, all of the Arab campers where from low socio-economic backgrounds. The campers came from three villages affiliated with the Menashe Regional Council, Eleran, Meisar, and Umm at Katuf.

The camp’s programming included soccer practices and tournaments between all the campers. The soccer practices were accompanied by educational dialogue, problem solving and group activities covering the topics of identity and “the other”. The camp was also a great social outlet for the campers who had access to the village’s pool and cultural activities.

As part of our evaluation of the camp, we conducted a survey amongst the participants, just as we did in previous years. The results show the strong positive impact the camp makes on all of its campers.

For a complete report on the survey, click here!