June 2012 – When three UNC students from three different faiths became friends through soccer, they realized the opportunity for something great. 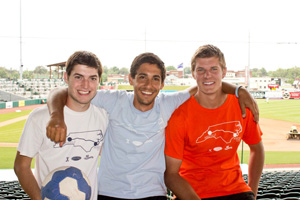 This past summer, Sasha Seymore, Dylan Simel, and Ahmad Saad – a Christian, Jew and Muslim, respectively – dribbled soccer balls across North Carolina. Starting from Asheville and finishing in Morehead City, the journey encompassed 450 miles along U.S. 70, or 21 miles per day. Why’d they do it? To demonstrate the power of soccer to unite.

When soccer retailer Eurosport, based in North Carolina, found out about the plan they quickly signed on with their support. The company donated nine soccer balls and six pairs of shoes for the trio to use on their journey as well as 400 T-shirts for them to sell. All proceeds from t-shirt sales will be donated to three charities: Soccer for Peace, the Maccabim Association and the Peres Center for Peace, which are all devoted to uniting children of war-torn nations through the game of soccer. Kicking Across Carolina raised well over $5000 in their journey.

“The organizations that we’re raising money for actually host soccer camps in the Middle East, bringing together children from all three of the different faiths, and trying to use soccer as a way to bring down barriers and break stereotypes,” said Ahmad Saad. 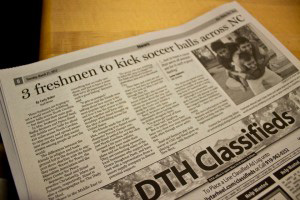 The three stopped in at Eurosport company headquarters when passing though Hillsborough and joined employees for lunch, a tour and a quick pick-up game before getting back on the road.

“Sport has always had the power to bring people together across all sorts of borders and boundaries,” said Jim Noonan, Eurosport’s vice president of marketing. “We are proud to support the young men Kicking Across Carolina, working to further that goal.”

“While our legs are tired, the encouragement that we receive along the way, and the welcome we get from people we see makes it so much easier,” said Sasha Seymore.

Dylan Simel agreed. “Every city we pass through, some people honk at us, fist pump at us. Some people stop and take pictures with us,” he said. “We don’t even know these people, but they’re showing us support and out of the blue just stopping and saying, ‘I wondered why you were walking along the side of the road, then I saw an article about it and I really support what you’re doing.’ That keeps me going more than anything.”

Daily videos and blog posts from the journey, information about t-shirt purchases and the charities being supported can be found at www.kickingacrosscarolina.com.