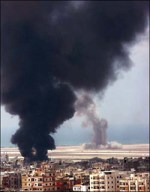 July, 2006 – There seemed no better time to hold a Soccer for Peace program than in the aftermath of the World Cup, a month long celebration for which the entire world stands together. Camp Coexistence 2006 started on this high note, with 100 Arab and Jewish children coming together just south of the Israeli coastal town of Netanya, assembling to watch the final match in an amphitheatre overlooking the Mediterranean.

No one expected French Captain, Zinedine Zidane to end his career by violently headbutting an opposing player, only to be sent off the pitch minutes before his side would succumb on penalty kicks. Unfortunate though it was for the game, the violence actually benefited our camp, providing fodder for examining what is and is not acceptable in sport, and by extension, in life.

Several days later a different violence would confront Camp Coexistence, one far more local and insidious. Following a spate of rocket attacks and the abduction of several soldiers, the Israeli army launched a full-scale offensive in Lebanon. The news would come hourly from the north: bombs dropped in the Bekaa Valley, rockets fired in retaliation at Carmiel, Beirut International Airport taken out. It was unclear how long the conflict would last nor to what extent it would escalate.

The more personal question, however, concerned our program. How would campers react? Were they even safe? Ultimately, is our labor for naught—a hopeless fantasy in a region doomed to violence? As with most onlookers, our opinion was colored mainly by press accounts. Hours after the war started, however, the Board of Directors reached out to camp staff:

“Have you made contingency plans?” Board members asked.
“For the closing tournament? No, it is confirmed for Friday morning,” replied Program Director Ma’ayan Castel.
“No, not the tournament, we are very concerned about the safety of the campers.”
“Why, the fields are in very good condition and we are very careful to hydrate.”
“Aren’t you even aware of what’s happening?”
“Oh, in Lebanon? You need to stop watching CNN and come play soccer.”

Indeed, as helicopters flew up and down the coastline, in campers’ full view, training was never interrupted. Thankfully, the campers’ physical well-being was never in question. Netanya was presumed to be beyond striking distance of Hezbollah artillery, with the closest rockets falling on Haifa, 50 km north (and two days after camp ended).

Moreover, the campers came from towns ten miles apart. Whatever risk there was of polarization was mitigated by the fact that any of their loved ones could be struck with equal likelihood. Oddly, the violence united Jews and Arabs in this instance, all citizens of Israel. SFP Board Member Forsan Hussein, who was in northern Israel as fighting erupted, literally heard two missiles whir by, later learning that they slammed into the Arab village of Majd-al-Qudur. Several days after camp ended, Kassam rockets fell just outside the Arab village of Daburiya, from where Camp Coexistence’s Arab participants hailed.

Our campers’ equanimity in the face of military conflict was more than a function of geography, however. Military presence is a part of daily life in Israel, and though this episode was extra-ordinary, to the kids, it was still less important than sports. Camp was in full swing by the time of the military incursion. Campers were not focused on a conflict that they did not see, nor understand, but on the challenge facing every twelve year old: winning for your team. Team bonds were forming and with parents’ night around the corner, to be followed by the closing tournament, the focus was unbreakable.

With the war long over, its purpose and execution very much in question, the rewards of camp remain intact. Soon follow-on programming will commence, during which campers may or may not recall the bizarre timing of Camp Coexistence 2006. They will, however, certainly re-establish and strengthen the bonds that were created last July. Bonds that, with Soccer for Peace’s assistance, will hopefully last a lifetime.