April 2013 – Say SFP fan, Paul Gootenberg, Brooklyn NY, “We’ve adopted Soccer for Peace as our son Dany Sainz-Gootenberg’s Mitzvah project for his upcoming Bar Mitzvah at the Brooklyn Heights Synagogue. How did we get there?

Well, several months ago, when the push to organize Dany’s Bar Mitzvah hit the panic stage, finding the “right” Mitzvah project seemed like one of our most stressful problems. In fact, I strongly favor our urban Reform shul’s policy of stressing Mitzvah projects (Tikun Olam) over glitzy teen parties and trivial themes. BHS even has a staff specialist guide in “Service Learning.” Still, it had to be a cause that Dany would “buy into” and reflect our family values.

We were thinking global awareness, given Dany’s multicultural background and education at Brooklyn’s new global Brooklyn Prospect School. The search narrowed when Dany and I explored on the internet the important movement inspired by “Seeds of Change,” which brings young people together face-to-face from world conflict zones (starting with Israel/Palestine) to help overcome the stereotypes, walls, and hatreds that fuels ongoing violence. When you add that ideal to soccer—Dany is a talented, dedicated soccer player who has played in Brooklyn’s AYSO 473 Region League for most of his life—all roads led to Soccer for Peace. However, I was totally sold when its director, Ori Winitzer, took time to chat with me personally about Dany’s possible projects. Ori was experienced with Mitzvah projects and acutely sensitive to the possibilities (and limits) in the imagination of 13-year old kids. He also knew how to concretize a project in meaningful, doable steps. In fact, shortly after our chat, Ori posted a new chart that lucidly shows parents and kids how to work with Soccer for Peace.

We decided to stress issue awareness and some modest (or so we thought) fundraising. In some ways, his Bar Mitzvah does have a “theme” now: We had SfP logo tee-shirts made to give away in the receptio (the local Hassidic silk-screener who made it really likes it) and ordered soccer-ball style Kippot. He’ll talk about SfP during his speech. Our Reform rabbi found this a terrific project and the Service Learning coordinador has invited Ori to talk with our Hebrew school. But what about fundraising?

It turns out to be both interesting and effective. Although I am a technologically challenged, we explored some fundraising website options for causes. There many such sites now, some dedicated just to charitable organizations. In the end, we jumped into one of the best-known platforms, Indiegogo, as it seemed the easiest to set up and friendly to 501Cs. It didn’t take long to “launch” our campaign. Here’s what Dany’s page looks like (minus the prominent SFP ball):

Note: This campaign is raising funds on behalf of Soccer For Peace Inc, a verified nonprofit. The campaign does not necessarily reflect the views of the nonprofit or have any formal association with it. All contributions are considered unrestricted gifts and can’t be specified for any particular purpose.

My name is Dany Sainz-Gootenberg,  I love to play soccer and am very active in Brooklyn AYSO 473.  For my upcoming (Feb. 2, 2013) Bar Mitzvah at the Brooklyn Heights Synagogue, I am undertaking a “Mitzvah Project”   My project is called “Soccer for Peace.”  It is a New York group that organizes soccer games among Palestinian and Israeli children, so they get to know each other as real people, not enemies.  This project fulfills the mitzvah of “making peace where there is strife.”

To find out more about Soccer for Peace, visit their website, www.soccerforpeace.com.

In the spirit of prophet Isaiah: “Let nation not lift up sword against nation, let them study war no more…”   Let’s try a little Soccer instead.

We are literally shocked with the rapid response! Of course, we sent the link out with an encouraging personal message to our families, guests (a small list), some colleagues, neighbors, and distant Facebook “Friends.” Within a day, donations in Chai’s and Double-Chai’s came pouring in from all over the world.

The first day, we almost hit the initial $648 goal (“Gooollllllll”—Double Chai-Squared). Two weeks in, we passed Quadruple-Chai-Squared ($1,300) and who knows how high it may go before the campaign expires after the Bar Mitzvah. Everyone has been so positive.

It’s exciting to watch it all happen and connect to so many real friends in a meaningful way. It also spreads the buzz that Jews can embrace an unconventional cause, one deeply rooted in prayers for peace. No doubt we know a lot of professional “do-gooders” –after all this is Brooklyn–but the giving is clearly inspired by the refreshing mission of Soccer for Peace (more urgent than ever after November’s depressing Gaza hostilities) combined with traditional Mazel Tovs for our Bar Mitzvah. 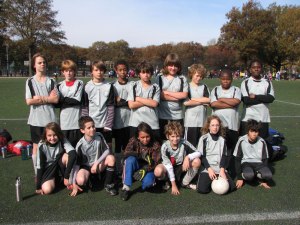 Oh: this is Dany (the amazing goalie centered here) with one of his Brooklyn teams, the Fall 2010 “Silver Rhinos.” Go Dany! (Attach Photo)