June, 2010– Just as South Africa looked to capture the World’s spirits by hosting a memorable World Cup, The Soccer for Peace Cup aimed to build off of its remarkable first two years and put on a bigger and better event.

And, as all participants will attest, the Third Annual Soccer for Peace Cup did just that! 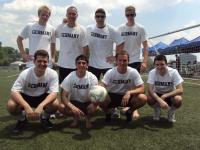 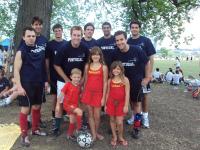 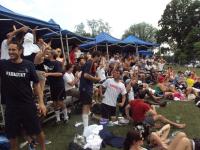 For the third straight year, SFP hosted its version of the World Cup on the last Saturday in June on Randalls Island. And this year, the soccer gods blessed us with fantastic weather and a perfect halftime show – the US vs. Ghana in the Round of 16. Over 500 friends joined us to showcase their skills on the field and scream at the top of their lungs off of it as we all watched the United States’ historic march through the world’s elite. As SFP’s Founder, Ori Winitzer, put it, “what better way to celebrate the game of soccer than to sit in front of a huge jumbo-tron screen on a beautiful summer afternoon with NYC’s rowdiest soccer fans to watch Landon and the boys take on Ghana”. Despite the US team being sent home early, SFP Cup participants and supporters played on and took part in what was our largest, most successful day in the organization’s six-year history. “Just amazing,” Cup Director/Referee Alex Fyfe shouted as he ran down the field blowing his whistle. “For three years we’ve been looking forward to ‘World Cup Year’ and all the soccer-craziness surrounding it. It’s fantastic to have everyone finally here!”

Thirty-two teams arrived early Saturday morning ready to test their skills against their fellow NYC soccer enthusiasts. The SFP Cup brackets mirrored those of the World Cup and as each team represented a participating nation, there was much debate over which colors would emerge victorious – Italy’s azure, the Netherland’s orange, Brazil’s gold & green or could it be New Zealand’s All Whites? Well, against all odds, it was Algeria and Paraguay who made their own historic runs to the final match. And with the game on the line, down 3-2 with 10 seconds to play (with vuvuzelas blaring), Paraguay snuck one by Algeria’s keeper to tie the match at three and force a shootout. On the sixth kicker, Paraguay’s goalie made a sprawling save to seal the victory. Well played – both teams. Congratulations to Team Paraguay, the 2010 SFP Cup Champs!